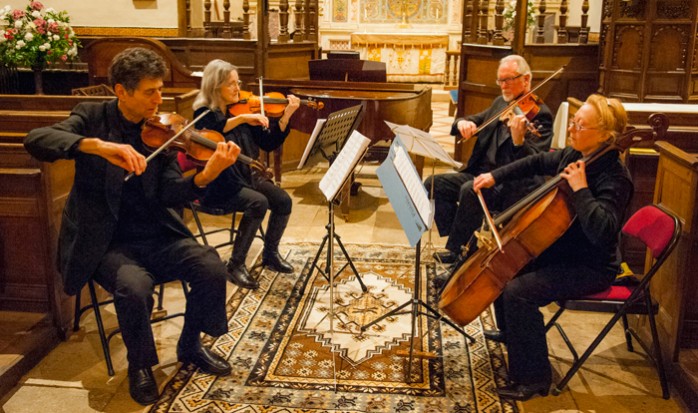 The Wiltshire Quartet is to play at the opening concert of this year’s ‘Farley Music Festival’ on Tuesday, 9 June, at All Saints Church, Farley, starting at 7.30pm.

The quartet’s most recent performances were at Potterne St Mary’s Church and at the Salisbury Chamber Music Club in Fisherton Street, where they received glowing accolades for their Easter presentations of Haydn’s ‘Seven Last Words of Our Saviour on the Cross’.

For the opening 2015 Farley Music Festival concert, the Wiltshire Quartet’s violinists Bill Benham and Catherine Demetriadi, violist Martin Alford and cellist Dawn Thompson, will be joining forces with tenor Hugh Hetherington and pianist Al Watson in Ralph Vaughan Williams’ stunning ‘On Wenlock Edge’ – a setting of six songs from A. E. Housman’s ‘A Shropshire Lad’.  Originally composed in 1909, the songs are accompanied by haunting, lyrical and occasionally furious music.

In addition, oboist Gaynor Alford will be accompanying Hugh Hetherington in Vaughan Williams’ ‘Ten Blake Songs’, described as miniature masterpieces and composed over the Christmas holidays of 1957.  They were first performed after Vaughan Williams’ death.

Available for concerts and events around Wiltshire and surrounding counties, the Wiltshire Quartet can be contacted via Catherine Demetriadi on email: thewiltshirequartet@gmail.com

All the members of the ‘Wiltshire Quartet’ live in Salisbury and the Wiltshire surrounding area. Their biographies are as follows:

Bill studied the violin with John Sealey at Winchester and then Jean Pougnet and Homi Kanga. At the age of 20 he joined the Bath Festival Orchestra and at 22 the London Symphony Orchestra. At 27 he joined the Northern Sinfonia as co-leader. Two years later he returned to London where he worked as a freelance session musician. He also qualified as a teacher of Alexander Technique in 1979. In his forties, he took lessons from Alfredo Campoli and gave a number of recitals. He also took up the viola in 1990. Since he retired from the London scene, he has given a number of recitals in the Salisbury area, twice playing in the Warminster Festival. He has recently become the leader of the Farley Quartet, re-launched in 2014 as the Wiltshire Quartet. He now lives in Steeple Langford and has developed an adjustable violin chin rest – the “Ergonomic Chin Rest” (see www.adjustablechinrests.co.uk) – which is especially suitable for long-necked players like himself!

Catherine Demetriadi began her violin studies as a student of Anne Gombosi, principal of the All Newton Music School near Boston, continuing in high school with Joe Schaaf at the Cambridge School of Weston. Her chamber music and orchestral playing took off during summers at Greenwood Music Camp in western Massachusetts.

Catherine moved to Wiltshire in 2009 to take up the post of Head of Development for the Royal School of Church Music. She has set up a development consultancy, FundraisingPoint, as co-Director of CommunicationsPoint Ltd – a marketing, PR and communications consulting firm – directed by her husband Julian.

Catherine plays with the Salisbury Symphony Orchestra and the Salisbury Sinfonia as well as gigging for charity events and playing in worship services. She was a founding member of the Farley Quartet along with Martin Alford, and the two of them joined forces with Bill Benham and Dawn Thompson in the autumn of 2014 to form the Wiltshire Quartet, which made its Salisbury and Dorset debuts in December. She also sings with various ‘pick-up’ groups including the Farley Chorale, Poscimur and QPM and is an artist, writer, and photographer.

Martin graduated as a Bachelor of Music at London University in 1974 and then trained as a school music teacher. He moved to Wiltshire in 1978 to be Head of Music at Pewsey Vale School, where he remained until his retirement in 2012.

He has been Musical Director of Devizes Chamber Choir 1981-91, Organist and Choirmaster of St Mary’s Market Lavington 1986-2000, and Musical Director of Swindon Gilbert and Sullivan Society 1993-2006. He freelances regularly as organist, accompanist and viola player, and is Principal Viola of Salisbury Symphony Orchestra.

Dawn started her working life as a peripatetic cello/bass teacher in Wakefield. On moving to Cheshire, she added violin to her teaching practice and coached orchestras in both Crewe and Nantwich.

She moved to Wiltshire in 1994, where she was employed as a cello teacher at St Mary’s and St Margaret’s Schools in Calne, and a few years later moved to Dauntsey’s School as a teacher and Co-Ordinator of Instrumental Music. She has led the cello section in many amateur orchestras and has enjoyed conducting, composing and arranging music throughout her career. Since leaving Dauntsey’s School (in September 2011), she has developed her love of textiles, and now spends much of her time in the Steeple Ashton Textile Studios where she is a spinner, weaver and dyer.