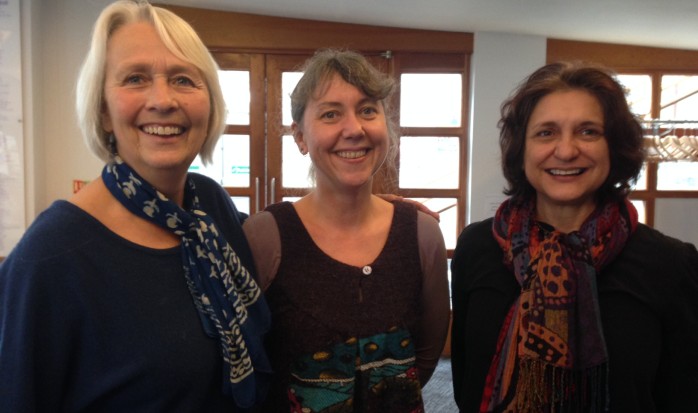 Salisbury Fringe is delighted to announce that two of its local writers – Veronica Dewan and Linda Morse – will be presenting their 50-minute plays on ‘adoption’ on 4 April at 7.45pm in The Salberg, as part of Salisbury Playhouse’s Theatre Fest West season.

In Veronica Dewan’s ‘She is not Herself’, a birth mother meets the mixed race daughter she gave up for adoption; while Linda Morse’s ‘A Shared Breath’ is an experimental play exploring the different perspectives of a birth mother, adoptive mother and their shared daughter.

Last month, ‘She is not Herself’ was given a ‘staged reading’ by Kali Theatre at The Tristan Bates Theatre in London’s Covent Garden, where it was directed by Helena Bell and performed by Amina Zia and Maggie O’Brien. The same director and cast will be bringing the performance to The Salberg.

Responsible for the performance of ‘A Shared Breath’ will be three stalwarts of the Salisbury Fringe – actors Samantha Holland and Roxy Dunn, and director Pete Talman. The cast will be completed by Tori Deffee and Mark Honan.

Veronica Dewan writes about identity, adoption and psychiatry. She received a Mind Millenium Award for ‘Birthwrites’ – from which a poetry sequence, entitled ‘Lost and Found’, was created and performed by transracially fostered and adopted poets at London-based Diorama Arts Studios. Veronica has received mentoring and script development support from local Dramaturg and Salisbury Fringe Writing Tutor, Angela Street, for ‘Papa India’; and in 2004, scenes from this play had staged readings by Caroline Hunt at The Salberg and Salisbury Arts Centre.

Linda Morse was part of the team that set up the first ‘Salisbury Fringe Festival of New Writing’ in 2013.   She has had a number of short pieces performed in Salisbury, East Dorset, Exeter and London. She has written several full-length plays – the most recent being ‘Empty Mirrors’, which reached the ‘Top Twenty’ in Bristol Old Vic’s 2014 Open Session. She has recently heard that another of her short plays has been accepted for performance at The Bierkeller in Bristol.

Veronica and Linda were part of the ‘Out of Joint Writers Academy’ at The Salisbury Playhouse, and appreciate the support given them by the Playhouse for this event. Both writers have benefitted from the mentoring and script development support from Angela Street. Project managing this event is Salisbury Fringe Artistic Director Andrew Thackeray. Financial support for the evening has been gratefully received from Salisbury-based Hugh Davies & Co chartered accountants.

For those affected by any of the issues raised in these plays or about adoption generally, Linda and Veronica would like to recommend the local ‘Adopters’ Support Group’ – run by another mainstay of the Salisbury Fringe, actor Sara Taylor. The Group meets from 7.30pm to 9pm on the first Tuesday of the month at Hale Hall, School Lane, opposite Salisbury Arts Centre (for more information: contact Sara on 07788 727234).

For bookings, contact the Salisbury Playhouse box office on telephone: 01722 320333; or email: boxoff@salisburyplayhouse.com

Pictured (from left to right) at The Salberg: Linda Morse; Sara Taylor, who runs the ‘Adopters’