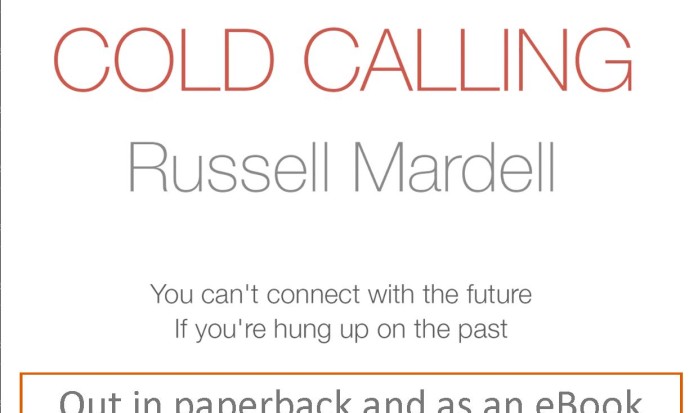 …It was just a phone call. Just meaningless words between two strangers. It didn’t mean anything…

Salisbury novelist Russell Mardell is launching his latest novel ‘Cold Calling’ in the city-centre at Waterstones on Saturday, 19 March at 7pm, where he will be signing copies of his new work of fiction. Local actors Geoff Adair, Stewart Taylor, Sara Taylor and Kerry Stockwell will also be reading short extracts from the novel.

‘Cold Calling’, partly based on Salisbury, has been described by Caroline Smailes, author of ‘The Drowning of Arthur Braxton’, as “genuinely funny, shrewdly observed and really rather brilliant”. Part of the novel was performed to great acclaim, as a play, at the Salisbury Fringe Festival. ‘Cold Calling’ will be out in paperback and as an eBook from 28 March.

Here is a synopsis of the story. Still reeling from a break-up with the love of his life, insurance firm cold-caller Ray English has become a bit of a screw up. Cynical and withdrawn, Ray is aimlessly drifting through life in London. However, once he is asked to reform his college band for a friend’s wedding, Ray is soon forced to face up to his old life, and the hometown he had tried so hard to turn his back on. Anya Belmont is a woman with a secret and a history that continues to shape her life. A coffee shop owner in Salisbury, Anya is successful, yet bored; married, yet lonely; she is also trying to avert a looming mid-life crisis. Through fate, coincidence or just bad timing, Ray and Anya’s lives begin to change when Ray cold-calls Anya and the two strike up a seemingly innocuous phone conversation. Against their better judgement, their conversation is soon the start of a telephone relationship of sorts. As the weeks and months pass, it grows in frequency and intimacy, and a curious, almost dependent friendship is born. But can there be anything real in just a phone call? As circumstances bring these two lonely souls to the same town at the same time, both are forced to question the truth of what they have started, and the realisation that if they are to move on in their lives, they will have to start by facing the ghosts of their past…

This sharp-witted, saccharine-free love story will appeal to those looking for a modern take on traditional romance, including fans of ’Love Virtually’ by Daniel Glattauer.

Russell Mardell is a novelist, playwright, producer and sometime director based in the south west of England. His first published book was ‘Silent Bombs Falling on Green Grass’ – a collection of twelve weird and wonderful short stories centred round the town of Mewlish Lull. His follow-up ‘Stone Bleeding’ is a dark dystopian satire of reality TV and celebrity culture. Most recently he has published ‘Bleeker Hill’ – a dystopian tale of horror, along with its sequel, ‘Darkshines Seven’. Russell has also written for the British stage where his plays have included: ‘Cool Blokes: Decent Suits’, and its sequel ‘Suits 2: Back From the Cleaners’ – performed at the Salisbury Playhouse; and ‘The Seventeenth Valentine and Freestate’, performed at The White Bear Theatre Club at Kennington in London. Having studied film production in London, he has also written and directed a couple of short films, and continues to develop a number of screenplays. Currently, Russell is a member of the Salisbury Fringe Festival Committee.