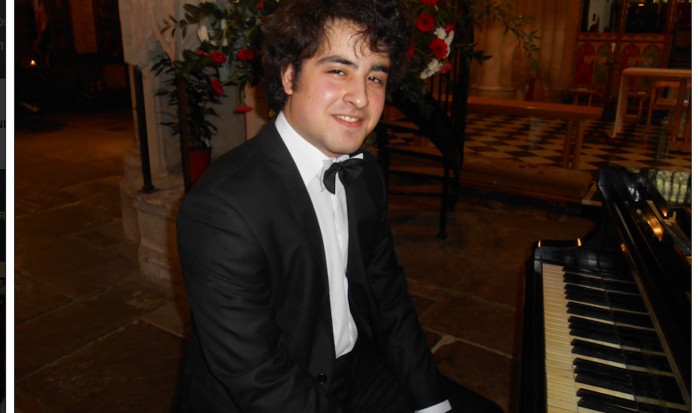 Two of the world’s most gifted young prize-winning pianists are to perform at the 16th Annual Farley Music Festival (20 to 25 June 2017) – world-class performances of classical music at the iconic Wren-style All Saints’ Church in the Wiltshire village of Farley, seven miles east of Salisbury.

Multi-prize-winning Russian pianist, Amiran Zenaishvili, will be playing a concert on Thursday, 22 June at 7pm – supported by the Salisbury Branch of the NFU; and award-winning Lithuanian pianist, Karolina Pancernaite, will be performing a concert at 7pm on Friday, 23 June. They will be completing the Festival’s week-night concert programme, performed by international musicians from the Royal Academy of Music.

From the age of five, Amiran studied piano at the Gnessin Special Music College, Moscow, under the guidance of Professors Ada Traub and Tatiana Vorobieva, and has performed publicly from an early age.

In 2003, Amiran played at Cambridge University for the ‘Young Russian Talents’ programme. In 2006, he received 1st Prize at the VIIth Concorso Internazionale Valsesia Musica juniors in Varallo, Italy. In 2007, he made his debut as a soloist with the orchestra of the St. Petersburg State Academic Capella and went on to receive 3rd Prize at the VIth International Competition – ‘A Step toward Mastery’ – in St. Petersburg, Russia. In 2008, Amiran received the Grand Prix and Special Diploma for the best performance of classical composition at the VIIIth International Balys Dvarionas Competition for Young Pianists and Violinists in Vilnius, Lithuania.

From 2009, Amiran continued his studies at the Central Music School (College) of the Moscow State Tchaikovsky Conservatory – as a student of Professor Alexander Mndoyants. In 2011, he was awarded a scholarship by The Yuri Rozum International Charitable Foundation, and in the same year he won 1st Prize at the International Carl Filtsch competition in Hermannstadt, Romania. In September 2012, he was awarded a special scholarship from the Government of the Russian Federation.

In June 2013, he graduated from the Central Music School with highest honours and was accepted to the Royal Academy of Music, where he has been studying with a full scholarship under the guidance of Professor Christopher Elton. In October 2014, he went on to become a finalist in the Jacques Samuel Pianos Intercollegiate Piano Competition; and performed at the Wigmore Hall in London. In August 2015, he was invited to perform an opening recital at The Romantic Age Festival in Norden Farm Centre for the Arts, Maidenhead; and in July 2016, he performed solo recitals and took part in different concerts in the Piano Festival at the Royal Academy of Music, and at the 16th Encuentro de Musica Festival in Santander, Spain.

Amiran also frequently appears as a solo performer and in chamber music ensembles for public recitals and concerts in Russia, Croatia, Denmark, Germany, Ireland, Norway, Spain, USA, and the UK. He is also fond of conducting and reading.

On Friday, 23 June at 7pm, prize-winning Lithuanian pianist Karolina Pancernaite will be playing music by three composers who were also celebrated pianists: Medtner, Liszt and Scriabin – with a rare chance to hear the latter’s thrilling piece, ‘Vers la Flamme’.

Prize-winner of 12 international piano competitions by the time she was 18, Karolina Pancernaite also has given solo performances in Denmark; Czech Republic with the Brno Philharmonic Orchestra, Lithuania, with the Kaunas Symphony Orchestra; France; Sweden; Portugal and the UK. In recognition of all her successes and musical achievements, Karolina received a commendation from the President of Lithuania, Valdas Adamkus.

Born in Kaunas, Lithuania, in 1995, she started playing piano at the age of six. After graduating from the J.Naujalis Music School in Kaunas, she was accepted to study at the Royal Academy of Music in London with Professor Christopher Elton. Due to her successful audition, Karolina has been granted a scholarship and the Maud Hornsby Award.

Along with her studies, Karolina is also an active solo and chamber music performer.

She recently gave a recital at a classical music festival in Lithuania – Sugrįžimai 2016’, along with colleagues from Luxembourg. She also performed a recital for the opening concert of the ‘Festival Musique en Ré’ in France with her chamber group; played the Shostakovich Piano Trios recital at the Royal Academy of Music; and played at the Aurora Festival in Sweden. Her next solo performance will be held in Einbeck and Hannover, Germany.

On the opening night of the Farley Music festival 2017,  Tuesday, 20 June at 7pm, there will be a performance by Juliette Roos (violin), accompanied by her equally talented mother, Ilana Mordkovitch-Roos (piano), in a concert – sponsored by Quilter Cheviot – featuring some of the most attractive and challenging works in the violin repertoire – Mozart: ‘Sonata in E minor’; Tchaikovsky: ‘Souvenir d’un lieu cher’; Brahms: ‘Sonata No. 1’; Ysaye: ‘Sonata No.4’; and Szymanowski: ‘Nocturne and Tarantella’.

Karolina Kubálkova, a young Czech-Canadian pianist with a growing global reputation, will be presenting the Farley Music Festival’s 7pm concert on Wednesday, 21 June, sponsored by Myddelton & Major. She will be performing a romantic programme of classical music – Brahms ‘Sonata No.1’; Schumann: ‘Sonata in G minor’; Ravel: ‘Sonatine’; and Jánacek: ‘In the Mists’.  Karolina has already performed in countries as far afield as Canada, USA, Croatia and the Czech Republic. The young star is the daughter of acclaimed musician, the late Antonin Kubálkova.

On Saturday, 24 June at 7pm, Hatstand Opera will be presenting their flagship show of hilarious scenes and heart-rending arias from the world’s favourite operas. The Farley Music Festival ends on Sunday, 25 June at 6pm, with the traditional Festival Evensong.

Tickets for each concert cost £15 per person, to include a free glass of wine at the interval. Tickets can be purchased from Salisbury Playhouse: Telephone: 01722 320333 (www.salisburyplayhouse.com); or on the door, subject to availability. For full programme information, visit: www.farleymusic.co.uk