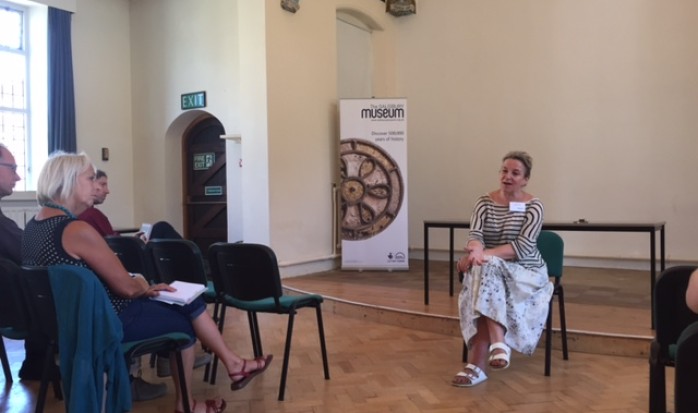 Last week, Salisbury Fringe writers turned out in force to get inspired first by local artists, and then by museum objects and surroundings, to pen one-page monologues that could well be selected for performance at the 2015 Salisbury Fringe Festival in October.

Commenting on the event, Salisbury Fringe Chairman Julian Demetriadi, said: “We are greatly indebted to the Salisbury Art Trail and the Elementals – namely, Jenny Ford, Jan Knight, Julia Leydon, Valerie Rutley-Paine and Cath Bloomfield – for displaying their wonderful pictures, under the theme ‘Pathways, Tracks and Routes’, to inspire our writers. There was everything from a hill-fort and a pathway through trees, to dinosaurs for catching the imagination of our playwrights.”

The best monologues, selected by an expert panel, will be performed by professional actors at 2pm on Sunday, 4 October, at Fisherton Mill in the city’s Fisherton Street – as part of the Salisbury Fringe Festival 2015, involving bite-sized plays in pubs, galleries, museums and cafés, as well as live music.

On Saturday (8 August), The Salisbury Museum in The Close played host to 19 Fringe writers. Louise Tunnard, Marketing and Administration Officer at The Salisbury Museum, gave a fascinating and inspirational introduction to the Museum – talking about everything from the building’s ghosts and history, to the costume and ceramics galleries and major objects of interest – such as the Salisbury Giant and The Hob-Nob, and the tactile Bowls Barrow Bluestone in the state-of-the art Wessex Gallery of Archaeology.

“Salisbury Fringe would like to say a very big thank-you to The Salisbury Museum Director Adrian Green, Louise Tunnard and her team,” said the Fringe Chairman. ”There was so many objects and facets of the museum to inspire every writer to pen a fantastic monologue. The best will be performed by professional actors at the 2015 Salisbury Fringe Festival on Saturday, 3 October, at 3pm in The Salisbury Museum’s Lecture Hall.”