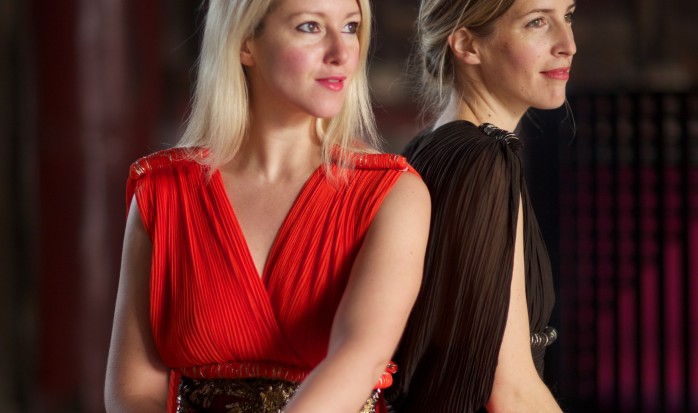 Following the record breaking success of the 2017 Festival, the 17th Farley Music Festival (19 to 24 June 2018) promises to be yet another unforgettable feast of classical music performed by some of the world’s most gifted musicians

Following on from the record breaking success of the 2017 event, the 17th Annual Farley Music Festival (19 to 24 June 2018) promises to be yet another unmissable feast of classical music, performed by some of the world’s most gifted musicians. Festival concerts take place in the historic surroundings of the iconic, Wren-style All Saints’ Church in the picturesque Wiltshire village of Farley, seven miles east of Salisbury.

Once again, the festival comprises five concerts (19 to 23 June), played by some of the finest young international performers, ending on Sunday 24 June at 6pm with the Farley Music Festival’s traditional Festival Evensong. This year, the theme is the Psalms of David, preceded by a Festival innovation: 2pm-5pm: 2018 Farley Music Festival and ‘Multitude of Voyces’ (MOV) partnership project – a workshop for church-music singers from the Salisbury area.

Tuesday, 19 June at 7pm: a performance by Retorica, the acclaimed violin duo of Harriet McKenzie and Philippa Mo, who met at London’s Royal Academy of Music. They formed Retorica in 2010 to explore music for two violins. Since then, they have performed all over the world – including in China, Germany, Japan, and at the Barbican Centre in London.

Gramophone Magazine chose Retorica’s debut CD of British works for two violins as the ‘must hear’ for chamber music and ‘editor’s choice’ in the April 2013 edition.

Wednesday, 20 June at 7pm:  a concert by a rising young pianist and Royal Academy of Music scholarship student Ariel Lanyi, who is making a big international name for himself. He performs regularly on Israeli radio and television, and has given numerous recitals in London, Paris, Rome, Prague, and Belfast. Born in 1997, Ariel has an unusually mature instinct for the classical style (a challenge for any pianist). His concert programme at Farley will contrast Mozart’s tragic Adagio in B Minor, K.540, with the sunniest of Schubert’s sonatas: The Sonata in D Major, D 850. Also, he will perform Schumann’s Sonata No.1, in F Sharp Minor, op.11.

Thursday, 21 June at 7pm: multi-award winning Hungarian-American pianist Julia Hamos will be travelling from New York to give her recital at Farley. In the ‘Big Apple’, she studied with the great Beethoven interpreter Richard Goode. Supported by Myddelton & Major,

Julia has performed internationally as a soloist and chamber musician, notably in New York’s Carnegie Hall and Lincoln Center, the Wigmore Hall in London, the Kennedy Center in Washington DC, and the Liszt Academy in Budapest. She has won the 2012 Sterndale Bennett Prize at the Royal Academy of Music for the best performance of romantic works; the 2014 New York City International Virtuoso Competition Grand Prix; and the 2015 Fidelman Prize at New York’s Mannes School of Music for best performance of contemporary works in the school.

Friday, 22 June at 7pm: following her triumph in delighting and thrilling Farley Music Festival audiences two years ago, the distinguished French pianist Isabelle Oehmichen is making a welcome return. A pupil of the legendary Georges Cziffra, Isabelle is now one of the world’s foremost Liszt specialists. She will perform Liszt’s Cantique d’amour, as well as three of his realisations of songs by Schumann, Schubert and Wagner. Also featuring in her recital will be Mozart’s Fantasia in D Minor, K.397/385g, and Sonata in C Major, K.330; as well as Chopin’s Nocturne in C Sharp Minor, pp.27, No.1; and Debussy’s Reflets dans l’Eau and the sparkling L’Isle Joyeuse.

Winner of the First Prize in the Milosz Magin International Piano Competition in 1989 and the George Cziffra Competition in 1993, Isabelle has recorded 13 CDs. Among her recordings are original and often newly discovered works. These include the Weiner and Wissmer concertos, the unpublished works of Henri Collet and Henri Sauguet, and the world première recording of Carl Czerny’s Nocturnes. Since 2017, she has been artistic director of the Cziffra Foundation in Senlis, France, and the Georges Cziffra Competition.

Saturday, 23 June at 7pm:  Sapori Vocali (Vocal Flavours) will present ‘A Night at the Opera’, a delightful taste of opera favourites in an intimate and informal setting, supported by the Salisbury Branch of NFU Mutual. Founded by Alexandra Frazer, a former pupil of Salisbury’s Godolphin School who graduated from the Royal Northern College of Music in 2016, this talented group of young artists will present a programme of enchanting arias and charming ensembles by the well-loved composers, from Handel to Humperdinck and Rameau to Rossini.

Sapori Vocali is a performing arts company that organises small local concerts and shows in village halls around Britain. The company’s aim is to showcase emerging classical artists through providing platforms on which musicians can perform and demonstrate their training and talent.

Sunday, 24 June at 6pm: Farley Music Festival 2018 ends with the traditional Festival Evensong sung. This year, the theme is the Psalms of David, preceded by a Festival innovation: 2pm-5pm: 2018 Farley Music Festival and ‘Multitude of Voyces’ (MOV) partnership project – a workshop for church-music singers from the Salisbury area. It is directed by Colin Howard, accompanied by lutenists attending a Lute Society workshop led by internationally acclaimed Jacob Heringman.  The workshop will explore the Devotional Psalms of Richard Allison (published in 1599), making use of new academic research by Professor Elizabeth Kenny, Head of Early Music and Professor of Music Performance at Southampton University and a former Professor of Lute at the Royal Academy of Music; and by Myles Payne from the Royal Birmingham Conservatoire.

A professional quartet of local singers, expert in early music, will support the ‘workshoppers’. Singers need to be experienced in reading modern notation. A knowledge of church music is helpful, and under 18s are very welcome to participate, accompanied by a responsible adult. For further information and signing up to the workshop, visit www.multitudeofvoyces.co.uk/choral-evensong-with-lutes. Details about the event also can be obtained from louisestewart@multitudeofvoyces.co.uk. Lutenists wishing to participate should contact Jacob Heringman via the Lute Society.

There is no attendance fee but donations are invited to Multitude of Voyces to contribute to their work with vulnerable and marginalised children and adults, including a project with children and young adults from Exeter House Special School, Salisbury.

At the Festival Evensong: the professional quartet of local singers, accompanied by Jacob Heringman, will perform an anthem.

Tickets for each Farley Music Festival concert cost £15 per person, including a free glass of wine at the interval. Tickets can be purchased at the Salisbury Playhouse, telephone 01722 320333. (www.salisburyplayhouse.com); or on the door, subject to availability. Proceeds from ticket sales go to the upkeep of All Saints’ Church Farley. The Farley Music Festival 2018 finale Evensong is free of charge. For full programme information, visit www.farleymusic.co.uk