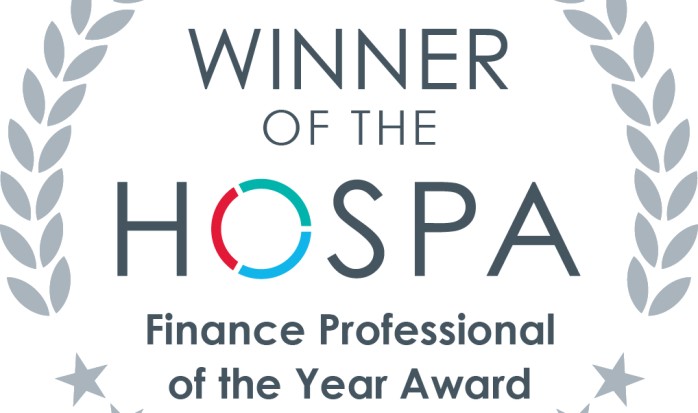 The winners of the prestigious annual ‘Hospitality Finance, Revenue Management and IT Professionals of the Year Awards 2016’, were announced and presented on Thursday night (10 November) by HOSPA – the UK’s leading educational organization for those involved in hospitality finance, revenue management and IT – at the Association’s HOSPACE2016 Conference & Exhibition Gala Awards Dinner, held at the Sofitel London Heathrow, Terminal 5.

The recipients of this year’s prestigious HOSPA awards (See ‘Notes to Editors’ for photo captions and fuller details) were:

HOSPA Chairman Chris Upton announced the winners and presented each of them with an engraved crystal trophy.  The three winners were nominated by HOSPA Fellows and Members, and then put forward to a special HOSPA selection committee. The recipients had to have: an exemplary track record; be willing to train and lead their staff; be totally dedicated to the hospitality industry, with the intention of remaining in the profession; demonstrate strong attention to detail; keep abreast of current codes of practice; and command respect within the hospitality sector and wider business community.

Commenting on the awards, HOSPA Chief Executive Jane Pendlebury said: “Huge congratulations to our three fantastic winners, who have all demonstrated exceptional ability and professionalism in, and dedication to, their chosen fields of hospitality expertise.”

In addition to the three awards, there was a special honour for former HOSPA Chief Executive Carl Weldon, who became only the sixth recipient ever to receive the ‘Outstanding contribution to HOSPA’ award, for exemplary service to the Association. In Carl’s case, it was over an 11-year period, which came to an end in March of this year when he left HOSPA to join the Association’s strategic partner, US-based HFTP (Hospitality Financial and Technology Professionals), and take up the newly created position of HFTP Chief Operating Officer (COO) – Europe.

Carl was appointed Chief Executive of HOSPA’s forerunner BAHA (British Association of Hospitality Accountants) in 2005, and was responsible for the development and growth of the Association – resulting in the transformation of BAHA into HOSPA, with a broader remit to meet the current needs of hospitality professionals. This was not only for those in finance, but also the major growth areas of revenue management and IT. Allied to the 2011 rebranding, the BAHA Annual Conference and Exhibition became HOSPACE.

“Well-deserved congratulations to Carl on this special award,” said Jane Pendlebury.” He has laid an extremely strong foundation for me to build upon as his successor. Under Carl, the Association was reorganised and re-energised. For example in 2012, HOSPA invested in Social Media – starting with 178 followers on Twitter, which now has risen to over 18,000 followers. Equally, HOSPA’s LinkedIn Group now has over 5,500 members. Another landmark in his leadership of the Association was the introduction in 2011 of HOSPA’s hospitality focused Professional Development Programme in Revenue Management, in addition to BAHA’s/HOSPA’s existing and highly popular Programme in Financial Management. Demonstrating the success of the two courses, a record number of learners enrolled on HOSPA’s Professional Development Programmes in 2015.”

Also commenting on Carl’s special award, HOSPA Chairman Chris Upton said: “HOSPA owes Carl a great debt for his drive and determination to transform BAHA into HOSPA and make this Association relevant to today’s needs, and one to be proud to belong to. Under his tenure, HOSPA became a major voice in the industry, its membership grew significantly, global recognition was gained; and HOSPACE became one of the biggest and most successful annual events on the hospitality calendar.”

The three HOSPA Professionals of the Year pictured at the 2016 HOSPACE Gala Awards Dinner on Thursday night (10 November):

Carl has been in Hospitality Finance and Technology, and Operations for over 30 years. Starting with Forte Hotels in 1978, he worked for Holiday Inns International for twelve years ultimately ending up in an EMEA corporate position. He also held positions with Periquito Hotels, Virgin Hotels, Regal Hotel Group, and Noble House Group.

1.HOSPA Finance Professional of the Year 2016

Working with Janine presents her team with a great opportunity to learn and develop. She is a strategist who always has her eye on the bigger picture, yet she never loses sight of her team. When things are tough, Janine always willingly rolls up her sleeves and leads by example. She challenges and offers constructive feedback, which can be sometimes hard to hear but always necessary to grow. Her knowledge of finance is clear, as is her dedication and passion for the hospitality industry.

Janine is an extremely dedicated professional, who is greatly respected by her colleagues at One Aldwych and the network built amongst her peers throughout the industry. Janine naturally builds rapport and works collaboratively with her hotel counterparts, always willing to give advice and support when needed. During a recent project to implement a new purchasing system, Janine took an integrated approach, visiting fellow properties for product demonstrations and to listen to others’ views, ensuring that all resources were tapped into and information shared.

Janine is meticulous, interested and organized. She takes time to engage with her management team, communicating business objectives and creating a better understanding of the financial aspects and decisions required to achieve the hotel’s targets.  As an approachable, hands-on and engaging leader, Janine has built a loyal and committed team – many of whom have developed their careers under her guidance.

It is our pleasure to recommend that Janine be recognised for her fantastic and most appreciated achievements.

Carol has an exemplary track record in the field of revenue management in a career spanning 16 years. In this specialist field, she has developed the first cluster revenue teams in the UK with IHG. She has been working with Interstate for the last 10 years – in charge of a 31-strong team across 70 hotels both in the UK and Western Europe, managing all the complexities of multi-branded hotels and non-branded assets.

Carol has led a team of revenue management innovators, creating tools to effectively collect and interpret market and performance data, allowing hotel teams to make informed decisions. She has coined the phrase in our business “hope is not a strategy”

She has developed and implemented within Interstate the ‘School of Revenue Management’, from where 34 next-generation Revenue Managers recently graduated.

Carol’s attention to detail is never more evident than in her support of new business development for Interstate, building 5-year business projections: by day, by segment, by peak and off peak. She has been instrumental in doubling the size of the UK hotel portfolio for Interstate over the last three years. She has achieved this through the absolute confidence she instills in owners and investors alike, demonstrated through her in-depth understanding of the opportunities involved.

Carol stays in touch with industry developments and did a Masters in Revenue Management at Cornell University. She is very active with big brand revenue development and the innovation this brings, and is a frequent hotel conference panel expert.

On the back of this outstanding performance, Carol has just been promoted to VP Commercial with Interstate – adding Sales and Marketing to her responsibilities, whilst retaining Revenue Management.

3.HOSPA IT Professional of the Year 2016

Nick Whiteside started his hotel career with Marriott in 1998 as part of their graduate program, initially gaining hotel operational experience in all hotel functions at three of their 4- and 5- star properties. From early on in his career, he showed a clear affinity (and passion) for technology. It was not long before he was working permanently in Information Technology (IT) operations – with roles growing from a cluster of hotels, progressing to an area responsibility for all hotels in the south of England, including Marriott’s landmark properties in London.  During this time, he project managed many technology initiatives across the portfolio. He authored network security documentation that  ultimately was used across Marriott’s worldwide portfolio.

In Nick’s current role, he leads a team at Marriott in Europe that is responsible for all aspects of technology related to hotel new-builds and conversions. Starting with the initial development, he pitches to potential owners and franchisees – managing the whole implementation and employee training phases of a project through to the final acceptance process with Marriott’s Field Technology Operations team, post hotel opening. This has given Nick an in- depth knowledge of the hotel technology infrastructure and applications deployed, both at an enterprise and hotel level. He is not entirely alone as he manages a team to deliver this, which is also testimony to his leadership skills.

He has been responsible for opening and converting anything from hundreds of hotels, to one of Marriott’s growing portfolio of brands. It is very hard to single out individual examples, but the highly recognised London EDITION would be one. The EDITION Brand was conceived by Ian Schrager, in a partnership with Marriott International. Nick had to use his strong interpersonal skills, along with his technology expertise to navigate the delicate balancing acts required during the opening of this hotel.

At a brand level, Nick was intimately engaged in the work Marriott did to define MOXY Hotels – Marriott International’s newest and edgiest affordable brand, with its unique tech approach in public and bedroom spaces, which has pioneered a number of new technology solutions.

Nick has most recently provided valuable expertise and guidance to a multi-disciplinary team that has conceived and refined – through a course of trails and pilots – Marriott’s strategy for Guest Room Entertainment in Europe. This has now been adopted as a brand standard across all brands.

Nick is a technology professional who is grounded not only in the love of technology, but also retains the passion of