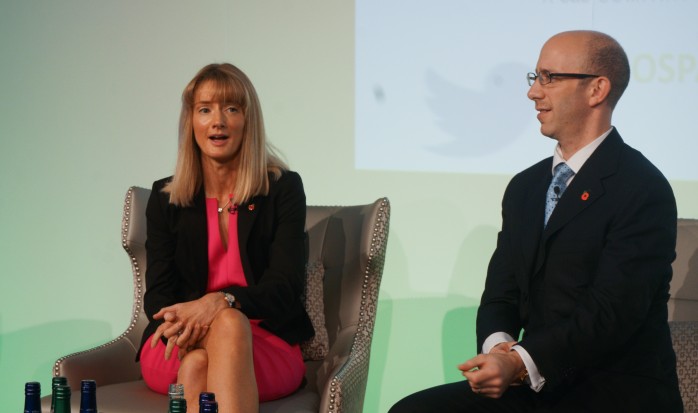 With thanks to Katherine Doggrell, Editor of HOSPA’s monthly magazine The Overview:

What a wake-up call – the Brexit vote in June, then Trump’s election to the White House in November. One year ago, who would have predicted either outcome? However horrified and dismayed we might be, we have got to live with the consequences and make the best of what many of us believe is a bad situation.  As 2016 comes to an end, the climate of uncertainty caused by these two events will underpin the year ahead for the UK hospitality industry, as indeed it will for Britain and the world generally.

On 10 November, the eagerly awaited annual HOSPACE2016 Conference and Exhibition of HOSPA – the leading educational organisation for professionals in hospitality Finance, Revenue Management, IT and Marketing –  was dominated by this very subject, as Katherine Doggrell, Editor of HOSPA’s excellent ‘The Overview’ monthly magazine, wrote in her HOSPACE2016 report:

Despite much of the coffee break talk being about Donald Trump’s election to the White House earlier that week, this did not overshadow the thread that ran through the day’s varied and highly topical HOSPACE agenda – namely, the impact of Brexit on the UK hospitality industry.

Over 440 delegates attending this prestigious annual event – held at the Sofitel London Heathrow, Terminal 5 – were left in little doubt about the challenges ahead in an ever-changing sector, vulnerable to geo-political and economic events.

Looking ahead at the likely impact in 2017 of the Brexit decision in a ‘State of the Industry’ session, Liz Hall, Head of Hospitality & Leisure, PwC, told delegates: “Uncertainty, volatility and disruption – with factors such as elections coming up in Germany and France – are likely to continue to challenge the industry into 2017. Business travel will be affected by uncertainty – with corporate travel budgets expected to narrow in 2017. Away days were making a comeback before Brexit, but they’ve now stopped.”

However, she noted that the falling pound would have a positive effect on inbound tourism to the UK and staycations. She added that the likely weakening of the dollar, in light of Trump’s victory, would also help with this. Hall went on to warn that security concerns were not going to dissipate in the short term, and that they might mitigate some of these benefits.

In the HOSPACE session dedicated to ‘The consequences of leaving the EU for the UK hospitality industry’, Martine Ainsworth-Wells, Head of Destination Engagement, ETOA (European Tour Operators Association), told delegates: “There is a short-term opportunity for Britain to be better value. The second opportunity is that not only has it not happened yet, but it might not happen in the hard Brexit fashion that people hope for. That’s because we have such an inexperienced team going up against one of the most experienced teams. So let’s continue as usual. Let’s not fan the flames of Brexit, but instead make sure government understands the importance and value of tourism, and takes this into account during negotiations. There’s a bigger crisis – terrorism and security – which is having a much greater effect on inbound tourism.”

She was also cautious about elections yet to come, commenting: “We haven’t reached the end of this cycle, we have other elections coming up and Pandora’s Box is open. Sadly, the ‘Far Right’ ideology of closing the borders and keeping terrorism out is alive and well in local markets.”

Another panelist in this session, Jeremy Robinson, Partner, Watson Farley Williams, pointed out: “Our expectation is that all the regulation which affects tourism and hospitality will be transferred into UK law.”

He went on to say: “Without aviation traffic rights, you can’t fly. If we exit the EU without an agreement on this, we revert to having bilateral traffic rights with each of the 27 member states, which are a lot more complicated. If you look at the individual treaties, they are more restrictive. At the moment, any EU registered airline can go to any other point in the EU. What will this mean for some regional airports?

“The nature of European law is that where it is applied in the UK, the courts are bound by interpretations by the Courts of Justice. When we leave, we won’t be subject to that, but that means that the law we have copied out will start diverging. And where we have legal inconsistency, we have uncertainty, which makes lives difficult.”

Robinson turned to consider the US President-elect, adding: “Trump is not seen as antagonist to the UK as Obama has been, so you might think we might be at the front of the queue for a trade deal. That said, Trump is also quite protectionist, so whether there is any US/UK deal or any US/EU deal is up for grabs.

“The first thing to think about is what Trump has said and what his attitude has been. He’s been more isolationist and said that Europe has to put its defence house in order, meaning that governments have to spend more money – that they don’t have – which could be better used elsewhere. We are living in an unstable world. Big planets have more gravity than small and you feel that more people will feel repressed and drink from the same stagnant water and express their unhappiness through voting. The threat of a fragmented Europe and aggressive Russia put the whole global economy in a very vulnerable position. While the Trump win puts Britain in a stronger position over Brexit, we are all poorer.”

On the subject of Trump, there was time at the end of the Conference for a wry smile from Robin Sheppard, Chairman, Bespoke Hotels, who commented: “I’m thrilled that a hotelier is now the leader of the free world!” Sheppard was taking part in a HOSPACE debate concerning the value of the brand, chaired by Specialist Consultant to the Hotel Industry Melvin Gold.

The third panelist in the discussion on the impact of leaving the EU on the hospitality industry was Mark Essex, Director Public Policy, KPMG, who believed that there was a big opportunity from Brexit, in the way it would force boards to rethink strategies they had been using for over 40 years. They would inevitably find things they could improve upon. There would be opportunities to review business models, and rediscover competitive advantage.

On the downside of Brexit, he warned: “This sector in particular has challenges in the labour market and not just from Brexit. I’m not sure that our government negotiators are as sympathetic to this industry as others.”

In line with Essex’s view, staffing was expected to be a key issue once the UK has exited the EU – with Sally Beck, General Manager, Lancaster London, commenting in the session on ‘Attracting and retaining talent’: “Brexit is going to affect us all, but it’s going to be long term. I think that we have to try and keep calm and retain talent and try and lobby the government to get our voice heard”.

Stephen Cassidy, Senior Vice President and Managing Director, Hilton UK & Ireland, added: “We will power on through, we’ve been an industry around for centuries, we’re an enormously successful industry and the growth projections are really good. We’re always going to be looking for people. As an industry, we have to give our people great bosses.”

Perhaps the last words on the impact of Brexit, discussed at HOSPACE2016, should go to

Essex and Robinson. The former concluded: “The Germans are still talking about the Norway and Switzerland option, but I think those options have been put to bed. The negotiating stance has to be ‘we’re up for this and we can walk away’. Who is going to win the debate, the bureaucrats or the businessmen? If the bureaucrats win, it will be hard Brexit.”

For his part, Robinson warned delegates: “The fact that a large number of people has chosen to vote for Brexit doesn’t mean that the country has to become unwelcoming and more difficult to do business in.”

He looked at the need to lobby harder for the industry’s needs, telling the audience: “The government has got more than enough to do than listen to different industries’ individual concerns. So we have to adapt.”

Next year’s HOSPACE2017 Conference and Exhibition will take place at The Lancaster London on 2 November. It is anyone’s guess what the world and EU situation will be in 10 months’ time. We all need to keep our nerve and pray by then that’s there’s some light at the end of what now appears a dark, highly complex tunnel.