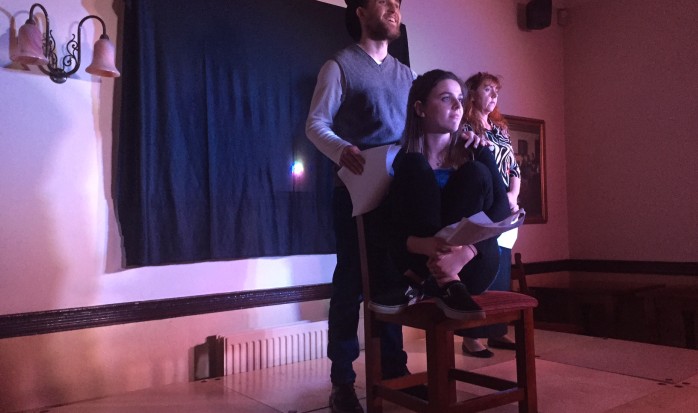 It always amazes me how everything comes together on the night and our recent 2016 Salisbury Fringe Preview was no exception. The brand new short plays – performed script-in-hand on Saturday 9 April at The Cloisters pub by professional actors – covered everything from mental illness; family problems surrounding old age; and a journey of discovery; to comedy about avarice and infidelity; and misunderstandings arising from the many meanings of words and phrases in the English language!

The five beautifully crafted new short plays, by writers from Salisbury and surrounding regions, were superbly performed and brilliantly directed by our Artistic Director Andrew Thackeray, assisted by Samantha Holland and Pete Talman. It was generally agreed that these were perhaps the strongest and best balanced line-up of new plays to date in the Fringe’s three-year history. Certainly, judging by audience reaction, we had five hits on our hands – plaudits received have included: ‘All four of us enjoyed the occasion greatly. What a creative way to launch local writers – congratulations!’ to ‘Last night was excellent. Super acting and direction, flawless admin and good scripts. Well done to everyone’.

The Preview has served up a great hors d’oeuvre for our main event – our annual Salisbury Fringe Festival of New Writing for Performance, to be held on Friday, 30 September; Saturday, 1 October; and Sunday, 2 October. Full details of the weekend will be revealed nearer the time (www.Salisburyfringe.co.uk ), but this year’s Salisbury Fringe will include – amongst other exciting events – an intriguing collaboration with Salisbury Museum.

The new short plays performed at The 2016 Salisbury Fringe Preview were: ‘English as a Foreign Language’ by Pete Talman; ‘What Now?’ by Nicolas Ridley; ‘Privet Flowers’ by Linda Morse; ‘No Flamingo’ by Rob Iliffe; and ‘Alice, All Alone’ – the first play to be written by a Salisbury Fringe actor, Katie Dancey.

As ever, my deepest thanks go to everyone involved – it’s such a pleasure and honour to be chairman of such a fantastic group of people and such a great cast that included: Sara Taylor, Iona Johnson, Annie Cooper, Laura Jasper, Kerry Stockwell, Holly Cassidy, Joe Bossano, Reece Evans, and Harvey Munnery.