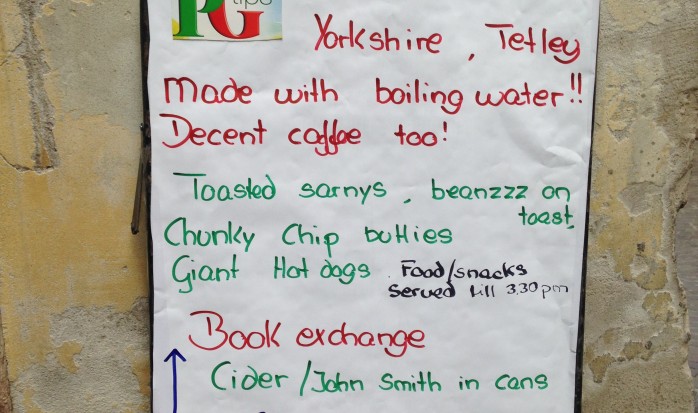 When I travel overseas, I am always embarrassed by my lack of languages and the fact I rely on other people speaking English. I ensure I can say at least ‘please’ and ‘thank you’ in the mother tongue of the country I’m visiting, but that’s sadly where it ends – with the exception of France. There, I can speak schoolboy French with a Ted Heath accent – to which I usually receive further humiliation via a response in perfect English, or a shrug of the shoulders suggesting “what the hell’s he on about?”! But at least I’ve tried.

That’s still in 2015 more than can be said for many of my compatriots travelling abroad, judging by the signs in English outside many tourist eateries attracting Brits who still won’t sample ‘that foreign muck’ – such as Spain’s (or should it be ‘occupied Spain’s’?) notorious Benidorm, where my favourite café sign advertises with great pride: “Fresh Bisto served here”. Makes you proud to be British, doesn’t it?

What I really didn’t expect to see last month was similar signage in a much more cultured and beautiful part of the world – the historic fortress town of Malcesine on the shores of Lake Garda in northern Italy. This glorious town, with its brightly coloured houses and fascinating streets at the foot of the Dolomites, was the perfect setting for enjoying a delicious gelato (Italian ice cream) from one of the many mouth-watering gelaterias. Indeed, the place was awash with great Italian food outlets, ranging from pizzerias to trattorias and ristorantes…then my wife and I espied a sign in English: “Yorkshire Tetley, made with boiling water, decent coffee too”. The sign went on to offer delicacies such as “chunky chip butties” and “giant hot dogs”. Our hearts sank…why, quite apart from the unthinkable: tea made without boiling water?! Surely, pizza and pasta dishes are now amongst the most popular dishes across all socio economic groups in the UK?

As we all know, there has been a food revolution in Britain, turning us from a country offering some of the worst eating-out experiences in the world, to one that now offers some of the best and most varied cooking on the planet – from cafés and pubs to five-star restaurants. So it was with utter dismay (and of course great amusement) that we found this sign, worthy of the early days of package tours. I hope you all enjoy the photo; and hope that this appalling image of the Brit abroad is finally laid to rest in the years ahead!